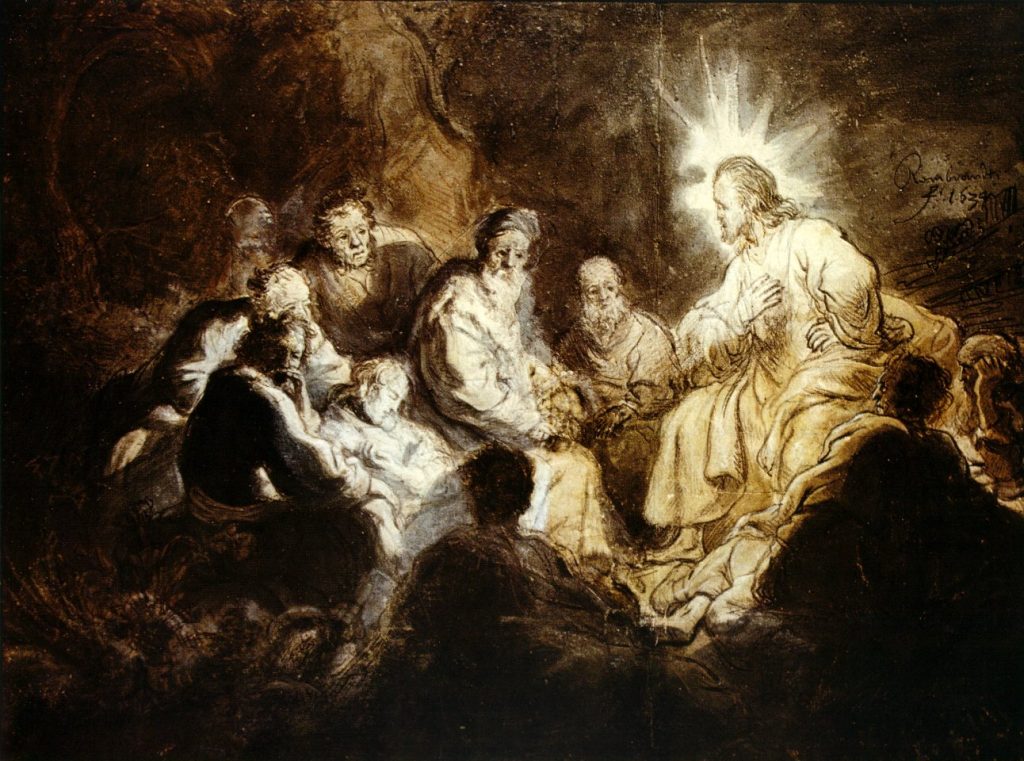 What I’m going to do today is continue with Father Doug’s Lenten motif of the shape and abundance of God’s love for us.   (Prelude to Holy Week.)

And the first thing that comes to mind with our passages from Hebrews and John is that God loves and values us so much that He lowered Himself to become one of us, to live and suffer in a fallen world as we do, and even die the most painful and horrible of deaths in order to save and reconcile us to God.

In fact, the underlying themes of Hebrews and John are “faith in the incarnate Son” and “the deity of Christ who has come in the flesh”.

For it is only when we begin to know & understand who the person of Jesus Christ really is that we can live in personal relationship with Him.

So I’ll give a very general overview of a few of the classic reasons as to how we know that the Son is both truly God and truly man in the one person of Jesus Christ, and along the way, I’ll address a few of the most common questions that result.

Let us pray: “May the words of my mouth and the meditations of our hearts be always acceptable in thy sight O Lord, my strength and my redeemer.”

1st, let’s review how God exists in Trinity – one God in 3 persons:

We usually refer to the Son’s mission to save mankind as being in 2 phases. (1) Descent or Humiliation: He descended, He freely entered our human condition by becoming flesh and emptying Himself of Divine Glory, except He remained sinless, He taught as a prophet, He served as both priest and sacrifice, was executed on the cross and was buried.   (2) Ascent or Exaltation: He ascended; He was resurrected and resumed the full exercise of divine dominion, and now He sits at the right hand of the Father as our mediator and advocate.

The Son, Jesus Christ, is one person with two distinct natures – human & Divine.

(Without the doctrines of the Trinity and the Incarnation, the N.T. makes little sense, and unless these 2 doctrines are true, the economy of salvation is not a reality.)

I. Jesus Christ is fully God

To begin with, both scripture the earliest creedal confessions tell us that the witnesses to the resurrection and earliest Christian communities confessed Jesus Christ as Lord and spoke of Him without qualification as the one God.  “No ancient Christian creed fails to confess the deity of Christ.”  This was remarkable given their deep roots in Jewish monotheism and religious training.

The earliest known creedal statement was, “Jesus is Lord or Kurios Iesous”. It was proclaimed by the earliest Christian Church in Jerusalem and was a direct reference to the use of Kurios in the Septuagint which translated to Yahweh, the name used for God in the Old Testament.  The earliest known NT preaching of Christ’s divinity is Paul’s use of this expression in 1st Corinthians.

So when the Church Fathers were faced with heresies (just as are we today) proclaiming that Jesus is not true God of true God, they produced the following 5 key arguments from scripture to confirm that Christ must be confessed as truly God.

1. If Jesus Christ is repeatedly addressed in Holy Scripture by ascriptions that could only be appropriate for God, then Christ must either be God or Scripture lacks authenticity.

Here are just a few:

The Son’s is proclaimed in Scripture as “Only-begotten”, “the Way, the Truth, the Life, the Light”, “the Effulgence, the Impress, the Image, the Seal” “Lord, King, He That is, The Almighty” (Gregory of Nazianzus, Orat. 29.17).

Jesus didn’t protest these ascriptions, He accepted the terms Messiah, Son of Man, and Son of God.  When He accepted Peter’s response “You are the Christ”, he confirmed that “He was not just another prophet pointing to the door of life, but the door itself.”

2. If the Son possesses attributes that only God could possess, and the scriptural witness is true, then He must be God.

There was little reserve in the adoration given him.  Jesus is Lord” (Rom. 10: 9) is the heart of the Christian confession.   In John’s gospel, upon healing the cripple at the pool of Bethesda, Jesus said, “That all men should honor the Son, even as they honor the Father.  He that honors not the Son honors not the Father which hath sent him.”

5. If the Son of God is viewed by the Apostles as equal to God, and the Apostolic testimony is true, then He must be God.

Phil. 2 states that “…Christ Jesus who, being in the form of God, thought it not robbery to be equal with God…”  According to John, the reason His accusers were determined to kill him was because “he was even calling God his own Father, making himself equal with God” (John 5: 18).

Subsequent to these earliest Patristic arguments we have the confession of the redeemed Christian community itself.  Even Wilhelm Herman, an ultra-liberal 19th century theologian admits that: “Experientially, when the historical Christ takes such hold of us, we have to do with God Himself— this thought is certainly the most important element in the confession of the Deity of Christ….”

“The deity of Christ is the differential feature of Christianity.  A suffering messiah who is less than God may elicit our pity or admiration, but not our worship.  A messiah to whom one cannot pray is not the Christ of the New Testament.  If the Messiah is God’s own coming, then Christ is God, according to apostolic reasoning.”

II. Being fully God, Jesus Christ is at the same time fully Man.

All the familiar elements of human nature are found in Jesus: body, soul, will, and spirit.   Scriptures speak of a real person having all things requisite for human existence, not an ephemeral but a real body, not an angelic but a rational human soul.  Everything that we as human beings experienced in the normal course of being human, Jesus also experienced, sin excepted.

The Gospels constantly portray him as living a thoroughly human, bodily existence: he was conceived in a womb and born when a census was being taken.  He had male reproductive organs, circumcised when he was an infant according to law.  He grew in stature— he did not come full grown.

He got hungry, thirsty, and weary.   He felt exhaustion when his bodily powers failed, and he was unable to carry the cross.  He was wounded and hurt when nailed to the cross.

The most decisive proof of his humanity is simply that he died. There is no doubt either to the eyes of faith or to historical investigation that Jesus died. The death of Jesus unmistakably marks him as one of us (Matt. 27: 50).

Virtually everyone who reads the NT asks the question “Why did God become man?”  And logically, the short answer is that “It was quite impossible for him to save man in some other way”, since fallen humanity needs an impeccable divine mediator who shares our human condition.

“There can be no mediation between God and humanity without positing a Mediator capable of empathy with ordinary humanity and of equal dignity with God (Phil. 2: 6– 11; Heb 2: 17– 18).

As human, he is capable of making intercession and sacrificial offering for humanity;

As divine Son, His act of sacrificial offering has infinite value to the Father (Heb. 4: 15).

If the one who died on the cross were only human and not the Divine Son of God, the death could not serve sufficiently as an act of atonement for the whole world.

If the one who died were only God and not human, there would have been no basis for celebrating the empathy of God with humanity.  Only a mediator fully divine and fully human could undergo the experience necessary to save humanity.”  (Oden, Thomas C.. Classic Christianity (Systematic Theology) (p. 316). HarperCollins. Kindle Edition.)

Why did God spend thousands of years preparing us to receive Him, become man, suffer, and die for us?

The overarching reason is because of His inestimable love for us; He values each and every one of us, sinners and saints, that much.  Such is the shape and abundance of God’s unconditional love.

When I think of God’s grace, I think of a Father holding his newborn for the 1st time and vowing “I will always love you and do what’s best for you and be there for you, no matter what.”

This is what is happening in our readings today, God’s keeping that same promise to us no matter what, when it seems it would have been so much easier for Him to simply throw us away and start over, or not.

Reflecting on our passage from Jeremiah, when God promises mankind a new covenant whereby the law of love is written in our hearts and minds, it is because of and through the incarnate Son that it is possible for human history to move from a time when “God was for us” to “God within us”.

Many protestant denominations call this “becoming fully sanctified”; the Orthodox use the expression “becoming Gods by grace, not by nature”.

Or, as C. S. Lewis describes it: “Now the whole offer which Christianity makes is this: that we can, if we let God have His way, come to share in the life of Christ. If we do, we shall then be sharing a life which was begotten, not made, which always existed and always will exist. Christ is the Son of God. If we share in this kind of life we also shall be sons of God. We shall love the Father as He does and the Holy Ghost will arise in us. He came to this world and became a man in order to spread to other men the kind of life He has — by what I call “good infection.” Every Christian is to become a little Christ. The whole purpose of becoming a Christian is simply nothing else.”

So what does it mean in our daily lives to participate in our salvation and become a “little Christ?”

The biblical definition of love is: “To value as God values”.  We are to love as Christ loves in thought, word, & deed.

We are told that God is love, and if we say we love God and do not love our fellow human beings, we are liars (1 John 4:20).  We are able to love God and our neighbors because God loved us 1st.  It is by loving others as Christ, the incarnate Son, loves us that we show our love to God.

Let us pray: “Our Father, enable us to love as You love, to embrace Your values and make them ours; enable us to die daily unto sin and live unto You in thought, word, and deed.   Help us to be your blessing to others.  We pray in the name of Jesus Christ our Lord.  Amen.”

Primarily quoted, paraphrased, and sourced from: