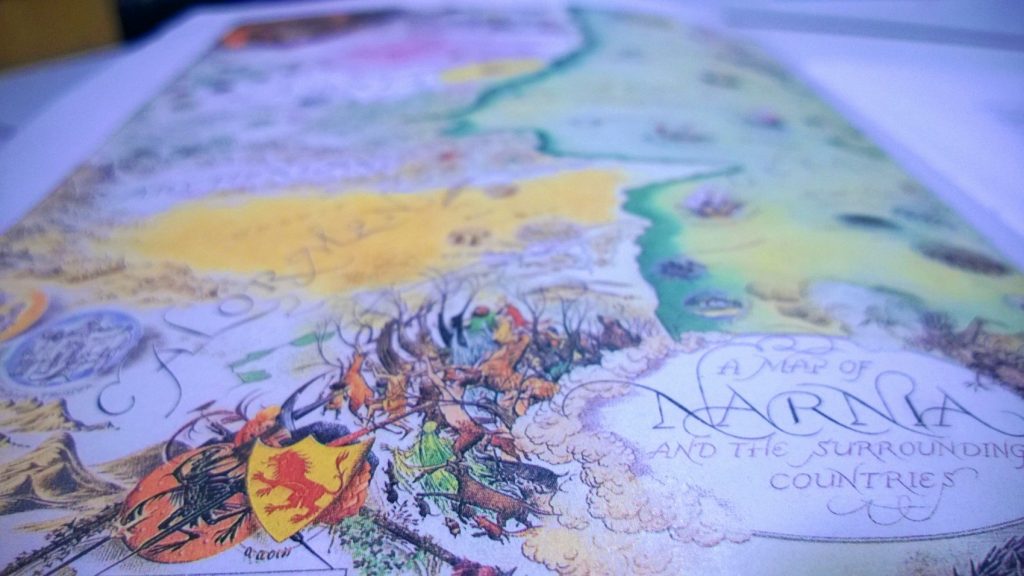 Faith and the Imagination
Pentecost 20A

When I was, oh, 12 or so, my grandparents decided to take me and my younger brother to Disney World for a week.  It had the feeling of a kind last hurrah for my grandparents and me… My younger cousins were due in a couple of months, and the special bond that 12 years of being the only grandchild in the family was coming to an end… My grandparents were starting to get older in a way that would soon limit their ability to walk the 11 miles a day you average walking around the Parks.

So, after two days of driving on the back roads of Georgia and Florida we arrived at the Caribbean Beach Resort.  We took the back roads because, according to my Grandad, “There’s no other traffic” on those roads.  Well, yes, but there’s no gas stations or McDonalds or restrooms, either, but we made it.

Day 1, my granddad comes down from the room to the food court for breakfast, arrayed for the Florida sun  as no other senior citizen in Orlando could be.  Bright white sneakers, brand new.  White athletic socks pulled up to the knees.  Pink shorts, a white web cloth belt and pale lime green Izod shirt, little animal on the chest and all.  Topping it off was a white flat cap.  He was ready for the Mouse.

There we sat, at the bus stop, waiting to be taken to the Happiest place on earth.  My Grandmother, brother and me.  Granddad was walking back from the food court with an extra cup of coffee.  My brother babbled about Mickey as Granddad took a seat and…

Let loose a vulgarity that I won’t repeat here, but suffice to say, Donald and Goofy would not have been impressed. I looked over and coffee was dripping through Granddad’s hands and fingers and onto the pink shorts, down his right leg, soaking into the bright white socks and into the white leather of his sneakers.

“Well,” he said, with his laconic, dry wit… “If you get lost, boys, all you have to do is bend down and look for the coffee-stained socks.”

Disney World is a unique place for memory-making, a place uniquely American, a place only America and Americans could produce.  Its appeal comes from a place of nostalgia for a world that never quite existed; seeing the works and products of our imagination come alive.  No Main Street quite looks like the Main Street of Disney World; Cinderella’s castle a product of forced perspective, and a cruise down the world’s Jungle Rivers is most likely to end up tragedy or disease than a visit from Albert Awol.

And it’s popular among certain groups to be snippy and dismissive of Disney world, but I can’t go along with that.  Instead of flattening or simply blanding American corporate consumerism, Disney World has a subversive streak, subversive of American fears and self-perception.

Americans are famously scared of death and the dying process; so Disney builds a Haunted Mansion, full of 999 happy haunts, the centerpiece of which is a huge party, spread across a vast table of ghostly treats.  Disney World may be the only theme park on the globe where the most popular ride isn’t the latest over-engineererd rollercoaster or a virtual reality experience, but a simple dark ride aboard a pirate ship, featuring a captain, a crocodile, a mermaid lagoon, and a boy who wouldn’t grow up.  In 1964, the year of the Gulf of Tonkin resolution, the murders of Medger Evers and Cheney, Schwartz and Goodman in Mississippi, the Rivonia trial in South Africa, a ride enlivened by a little ditty sung by 300 animatronic children from reminds us that “It’s a Small World After All.”

It’s a place where death is something to be laughed at, where sin doesn’t exist, families and individuals never grow up, and into which we must enter as little children.

You might be excused for thinking I’ve confused Disney World for the Kingdom of God. Not confused, I think.  Just a version set in the imagination of one man, and his friend, Mickey.

With or without intention, the living characters of our books, film, songs and art reflect the Great Story of the Gospel: of a fallen, enslaved humanity rescued by a God that loves, that reaches out and that destroys the slavers, clears away the fallenness, and restores to perfect communion.  Our imaginative saints weave in and out as real saints, giving us lessons on how to interact with the Gospel, how we interact with one another, and how we interact with ourselves.  They, like the actual, real-life-saints, are imperfect mirrors and reflections, but still offer another “take” on what it means to be Christian,  what it means to be Gospel people.

You may not know it, but we are in the middle of the creation of an entirely new artform.  Video games, having matured from the simple beeps and boops of the early ‘80s, now open up entire worlds to experience, stories told by choice and exploration.  There’s the Mass Effect Universe, it’s hero Commander Shepard (Shepard?  Get it?  Alan Shepard and “shepard?”) who must unite and lead a galaxy of divided alien civilizations, each with competing interests, to salvation and defeat the terrible Lovecraftian reapers.  Or you can play as the Lone Wanderer, a survivor from a world-wide nuclear war, who must search for a way to bring the Waters of Life to the wasteland of the ruins of Washington DC… Spoiler alert: It’s in Revelation 21:6.  Literally.

Or you can explore the city of Rapture (show).

This is the setting of the game Bioshock, a game rich of Christian themes and images.  Set in the fallen utopia of Rapture, founded as a kind of Ayn Randian paradise of free choice and laissez-faire economics, the game imagines a city corrupted by a substance called Adam that gives users superhuman powers… but decays their humanity.  The city is patrolled by Little Sisters, small, inhuman-looking girls who are used to harvest Adam from the dead.  Protected by the giant, mutated Big Daddies, the player is presented with a choice throughout the game: rescue the Little sisters and risk death at the hands of the Big Daddies, as well as sacrifice your own supply of Adam… Or harvest them, with unknown consequences.  As the game progresses, the player must wrestle with questions of choice and freedom, self-sacrifice and selfishness, and the consequences of their choices throughout the game.  As Andrew Ryan states: A man chooses, a slave obeys.

When Bioshock first came out in 2006, it was praised for its inclusion of a “moral choice” within a gaming universe, as well as its handling of complex philosophical questions; gaming as an art form has long moved past the basic need to throw fireballs and rescue the princess.  Now players make decisions in an imaginative moral framework.  And saints begin to appear.

But like with all things touched by humans, we see ample room for twisting and abusing our imagination into deployment against the Gospel.  For every horror film that explores our deepest fears and propels us into the unknown, there is a slasher movie that delights in murder and lagubrious depictions of violence.  For every romance that teaches a self-giving erotic love for one another, there is pornography that distorts and destroys human sexuality.  For every fantasy film that delights children with magic and wonder and humanity, there is one that asserts a fascist violence as the source of all answers.  Indeed, even our beloved Chronicles of Narnia need criticism.  Fantasy writer Neil Gaiman tackles the question of Susan, who is denied the Real England of The Last Battle for being interested in “nylons and lipstick” instead of Aslan like the rest of her family.  He takes the logical conclusion of Susan’s story… What would it be like to be the one left behind after a train crash kills your entire family?  What would your response to The Untamed Lion be?  He writes: ““I don’t know about the girl in the books,” says the professor, “but remaining behind would also have meant that she was available to identify her brothers’ and her little sister’s bodies. There were a lot of people dead in that crash. I was taken to a nearby school, it was the first day of term, and they had taken the bodies there. My older brother looked okay. Like he was asleep. The other two were a bit messier.”

“I suppose Susan would have seen their bodies, and thought, they’re on holidays now. The perfect school holidays. Romping in meadows with talking animals, world without end.”

“She might have done. I remember thinking what a great deal of damage a train can do, when it hits another train, to the people who were travelling

It is strongly hinted that the “professor” of this story is, in fact, Susan.  And as we wade into the grief and trauma of the story of how the Pevensies come to the True Narnia, we have a job to do in understanding “The Problem of Susan.”

It’s no wonder then, that even within Christian quarters imagination and creativity are attacked and thought to be dangerous.  It must be tamed, monetized, made into a digestible form, sanitized, areas declared off-limits, refused to be engaged with.  But to do that leaves an unsatisfying answer to the question: “Who does imagination belong to?”

Jesus is confronted in the Temple by the Pharisees asking about paying taxes (and see, you thought I was going to be all political today!).  We know this story; give unto Caeser what is Caesar’s, and what is God’s, to God.  But if we just gloss over the story, we miss what is actually being said; the tax belongs to Caesar because it bears his image; we belong to God because we bear the Imago Dei… The image of God.

Walter Ong, a Jesuit scholar of the OT, points out that this image is carried most plainly in the creativity of humanity; that the image of God that we carry is in our ability to create.  No other animal can claim an imagination or power to create a living, breathing , if imperfect, New World.  This should change our whole underlying understanding of the way we interact with one another…  A lie isn’t just saying something that isn’t true… It’s the building of a *false world.*  Stealing just isn’t taking something that isn’t yours… It’s depriving the other person of the resources necessary to think creatively.  Bullying, harassment and hatred shut down other people’s creativity and the destruction of creative worlds. Murder doesn’t simply kill another human being… It means the death of a creative force in our universe, wherein hundreds of thousands of potential saints could live, move and declare their Gospel among their peoples.  We dare not trample on this creativity because this creativity, this wonderful Image of God in us belongs to God alone.

Our Nostalgia for a World that never quite existed is a Nostalgia, a hoping for the Living and True World of the Living and True God, where God’s creativity becomes unrestrained by human sin and corruption, where we can live in fullness with Jesus, all the saints, the living, the imaginary, and the true. The living and true God of the Thessalonians is the same God that lives and rules over Narnia, over the city of Rapture, over Coruscant, over San Frantokyo and over Disney World.  Can you imagine it?  Let us run further up and further in, let us leave today and enter the True World of yesterday, tomorrow, and fantasy.

Close your eyes, and imagine with me.