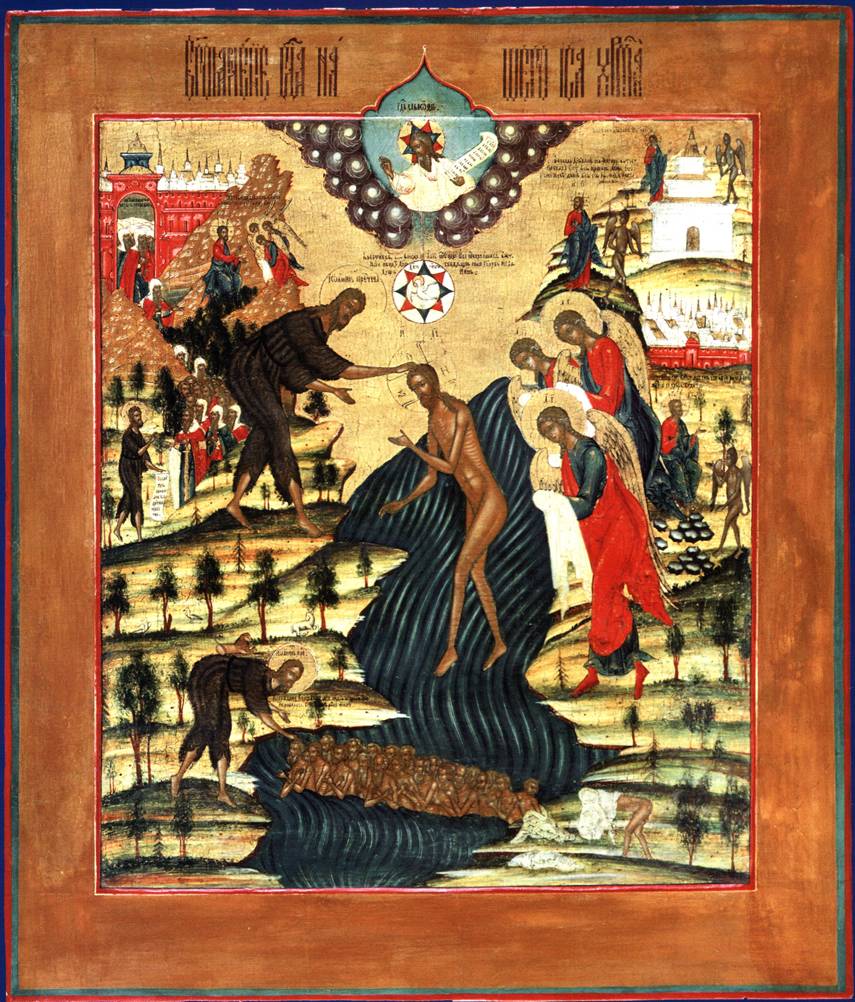 Today we are observing the Baptism of the Lord as recounted in the Gospel of Mark. Throughout this year B in the lectionary cycle, Mark will provide our primary Gospel readings. This Gospel is shorter, starker, and in some ways more mysterious than the other Gospels. Mark doesn’t explain details for us like Matthew or Luke. While Matthew and Luke provide background story to the coming of the Lord, Mark jumps to the beginning of Jesus’ ministry. He opens his story of the Good News with the simple phrase, “The beginning of the gospel of Jesus Christ, the Son of God” (ESV Mk 1:1). And immediately we meet John the Baptist, a voice crying out in the wilderness.

Over the years, many readers have felt the intense confrontation with Jesus in Mark’s snapshots from His life, culminating in the cross event. Consider Jurgen Moltmann. While sitting in Scottish prison camp during World War 1, he and other German captives learned of how their country participated in a true horrors against humanity. Jurgen felt darkness and shame swallowing him. While he had little exposure to Scripture in the past, a chaplain handed him a Bible. He began to read the Gospel of Mark. This encounter altered the course of his life. He writes,

I read Mark’s Gospel as a whole and came to the story of the passion; when I heard Jesus’ death cry, ‘My God, my God, why have you forsaken me?’ I felt growing within me the conviction: this is someone who understands you completely, who is with you in your cry to God and has felt the same forsakenness you are living in now … I summoned up the courage to live again.[1]

Moltmann has spent the rest of his life studying Good News of Jesus Christ. He writes about the future hope of God that breaks in to our lives in the here and now. The unveiled mystery of Jesus Christ, the Son of God in this Gospel awakens us to a Savior who suddenly appears among us with redeeming hope. Let us pray for ears and eyes to behold our Savior comes even now. (silence)

In today’s reading, John is baptizing in the Jordan when Jesus suddenly appears. The text captures the same sense of suddenness that 1 Kings communicates when Elijah suddenly appears before Ahab with a word from the Lord. John the Baptist has just proclaimed that a greater one is coming who will baptize with the Spirit. Think of Elijah appearing and calling fire from heaven.

Right after John speaks, Jesus appears. He does not baptize as expected. In fact, he is baptized. There is no fire. No blazing trumpets. He simply appears and is baptized by John with no explanation from Mark. The mighty one appears and humbles himself before John and the world.

Erasmo Leiva-Merikakis writes, “The human Face of God is humility, confession, the seeking of newness of life and mercy. In order to show us how we should approach God, God himself comes to us bending his head in a gesture of humility. And what John was expecting was a sweeping cosmic gesture with a heaven-sized winnowing fork.”[2]

Then he comes up out of the water. He arises. And immediately, he sees the “heavens torn open and the Spirit descending like a dove.” This brings to mind a prayer from Isaiah 46, giving voice to a people suffering under the judgments of God who feel forgotten and abandoned. He prays,

In Mark, the heavens are rent, and the Spirit of God comes. And the Voice of speaks, “You are my beloved Son; with you I am well pleased.” (Mk 1:11).

In this dramatic unveiling of heavenly mysteries, several things appear to be happening simultaneously. First, we are given a front row seat to unveiling of God’s glory upon Jesus in his baptism, in his descending and arising. The text indicates that this glorious vision was for Jesus alone. The people present are unaware of the drama playing out before them.

And yet, we’ve been given the privilege of beholding the Glory of God, the beautiful communion of Father, Son and Spirit in this action of baptismal descent and ascent. This is an intimate, secret communion of love shared between Father, Son and Spirit. We have been invited to look and behold. God is opening eyes and ears to the wonder of His love as revealed in Jesus Christ.

Even as we pause over the breathtaking unveiling of God’s glory, we are also beholding images that look similar to the creation day. The church has often understood this as the first glimpse of new creation. Jesus comes to be baptized and the waters below and the heavens above are blessed and glorified by His presence. The Spirit appears hovering in some sense over the waters. And then the voice, “You are my beloved Son; with you I am well pleased.” Which could bring to mind “the pronouncement of God in Genesis 1, “It is good.”

As we behold this moment, we see the promise of Jesus humbling himself, becoming man, and entering into our curse of sin. But we also see the hope of Jesus that will come as he raises the cosmos up in His resurrection. In Christ, the heavens and the earth are being transformed.

The heavens are torn open just as the curtain in front of the holy of holies will later be ripped from top to bottom at the crucifixion. The veil of our hearts that has blinded us from God’s goodness and love in all creation has been ripped open. In Christ, we step out into a world that is a holy gift, that shimmers with the glory of his love.

In this one short vignette of Jesus being baptized, we see a glimpse of the Son of God humbling himself and descending into human sin and shame, then we see him ascending into glory. The heavens are torn open and we behold Glory of the Beloved, filled with the Holy Spirit and blessed by the voice of the Father. In this sacred unveiling, we see the promise of God’s coming down in answer to the cries of His people even as we see him renewing His creation in the light of a holy, sacred love.

We begin to see why baptism was so central for the early church.It was more than simply a sign of public obedience. It was a public exorcism. Casting out the evil one and preparing the way for all things made new. Thus, the pattern of receiving new clothes at baptism, which is still continued with new outfits at Easter. Here is the mystery: even as we have followed Jesus into baptism, we have been baptized into Christ. We have been baptized into a new family, a new body.

Pope Benedict XVI says that baptism was sometimes called the “enlightenment” because eyes and ear and heart were opened to the glory of God in Christ. It is a healing of the soul even as it is a healing of the body. For the church, baptism is never a past event: it is as close as daily prayer and the reciting of the Apostles Creed, it is a close as the crossing of ourselves in remembrance of our own baptism.

In remembering, the blessing is made present. We are reminded that we have been caught up in the covenant. The communion of love in Father, Son and Spirit. Even now in this age of struggle and pain and challenge, we discover along with Jurgen Moltmann that we are a people of the future, a people of hope, always moving toward hope. The Old Creation has no claim upon us. Evil has no claim upon us. We have been claimed for God in Christ Jesus.

Whether we walk through days of joy and laughter or nights of tears and suffering, our hope is unshakeable. For we have been granted to behold, 26 the mystery which has been hidden from ages and from generations, but now has been revealed to [us] His saints. “27 To [us] God willed to make known what are the riches of the glory of this mystery among the Gentiles: which is Christ in you, the hope of glory.” (Col 1:26–27).

Even as we behold Jesus being humbled and baptized in the river Jorden, we behold all of creation baptized in the fire of God’s Spirit. We put out hope in Christ alone, trusting his Spirit day by day to lead us, disciple us, transform us into glory, and to send us out with the mission of inviting others into the mystery of this love eternal.